For those of you who may be packing school lunches for your children or for yourself in the weeks ahead, I have listed below some ideas of food choices in following a restricted sucrose diet.

Suggestions for sandwiches:
-Sandwich made with bread slices that have 1 gram or less of sugar per slice.
-Deli meat that has no sugar added to flavor it.
-Peanut butter sandwich (jellies are not allowed since they have too much sugar in them, but is okay to use a
thin layer of honey with peanut butter, if desired)
-Tuna or egg salad with mayonnaise.
-Cheese sandwich....can use sharp cheddar cheese if lactose intolerant.

If you are trying to follow a gluten-free diet, corn or rice tortillas work well for cheese and meats. Taco shells are another option.  Sarah sometimes has a peanut butter sandwich made with 2 thin corn cakes or can use rice cakes.

There are selections of gluten-free breads available as well that don’t have much sugar.  Most of them are quite expensive unless you make your own.

Add a piece of fruit to the lunch:
We find that an apple or pear is a good choice as they seem to be more filling than some of the other fruits. If there is limited time for eating lunch, container of applesauce works well.
Of course, plain yogurt and adding your own fruit to it is another great choice!

Add a vegetable such as carrot sticks or celery.  Cold peas and slices of cucumber or dill pickles are good choices too.
You can add a container of hummus for dipping raw veggies in, if desired.  I’ll add a recipe for that below that is mild.

Some products that I noted at Whole Food Store if you are looking for organic:
“365” Golden round crackers—1 gram in 6 crackers
“Back to Nature” classic Rounds—1 gm. in 5 crackers
“Harvest” whole wheat crackers—0 gm.; Crispy cheddar crackers—0 gm.
“Blue Diamond Nut Thins” (all types are gluten free and have 0 grams of sugar added)

These are some breads that have only 1 gram of sugar per slice:
Whole foods brands—Italian bread—1gram/slice
Spelt - less than 1 gm

For a beverage, water is the best choice; unsweetened tea is okay, milk is fine too, but no juices are allowed, since they contain too much sucrose.

I hope this list is of help.
Blessings to you all!
Martha 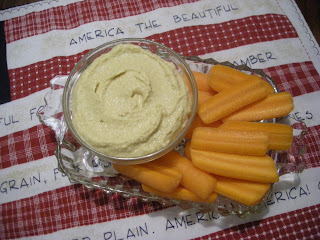 There is a fascinating article about sugar in the August issue of the National Geographic magazine.  It tells of the history of sugar and that the amount many consume is toxic.  Richard Johnson, a nephrologist at the University of Colorado has noted..." It seems like every time I study an illness and trace a path to the first cause, I find my way back to sugar."
It's hard to believe that the average American consumes more than 22 teaspoons of added sugar a day!

Here's the link to this very informative article.  http://ngm.nationalgeographic.com/2013/08/sugar/cohen-text

Hope you have a great last week of summer! Be sure to check back later in the week for some ideas of healthy snacks to pack in school lunches.
Blessings,
Martha
No comments:

Possibility of Celiac Disease in Association with IBD

About 2 years ago, my daughter, Sarah, began to feel extreme fatigue and started having headaches after lunch.  She had no other symptoms.  Since I have had a wheat-intolerance for over 15 years which causes me great fatigue along with achy finger joints, I suggested she try eliminating gluten for a week.  After following a gluten-free diet for several days, her energy level resumed to normal.  She had an appointment to see Dr. Poley in a few weeks for her yearly check-up and planned to discuss it with him then.

When we were searching for answers for the cause of Sarah’s anemia in 2003, she had the antibody blood tests done for Celiac twice which were negative. The endoscopy report did not indicate Celiac either, so we presumed and hoped that would never be an issue.  But at her appointment with Dr. Poley 2 years ago, after she mentioned her experience of fatigue and headaches after eating wheat, he ordered a genetic test to rule out Celiac; he thought that a HLA-DNA test would improve diagnostic accuracy. A cheek swab specimen was sent to Kimball Genetic Lab in Colorado. http://www.kimballgenetics.com/about.html .  The results were positive for one of the markers for Celiac disease. (DQA1- O5 allele)  Dr. Poley also ordered a Vitamin D level.  The result was low at 17, which can be associated with Celiac disease. So in addition to following a restricted sugar diet, Sarah now follows a gluten-free one as well.  Since I have been eating a gluten-free diet for a number of years, it made the transition of finding the right foods a little easier.

Dr. Poley has noted from patients when he was in practice and also from many research articles that Celiac disease is one of the most under-diagnosed disorders in this country. There can be false negatives with the antibody blood tests.  Sometimes it can be missed by an endoscopy or even by a biopsy.

I recently heard about an experience from someone who has been corresponding with me about her daughter who was recently diagnosed with ulcerative colitis.  Her daughter was improving with the sucrose-restricted diet and probiotics but when she started following a gluten-free diet, she improved even more. They are currently awaiting further test results.

If the sucrose-restricted diet and probiotics are helping you, but not totally restoring your health, you might want to try a gluten-free diet as well and talk to your doctor about further testing for Celiac disease.

I’ll add a recipe below for gluten-free oatmeal bread or muffins.  Enjoy!
May you be blessed with good health!
Martha
Oatmeal  Banana Bread or Muffins
1 ½ cup oats and 1 cup milk (soak together while mixing the rest) 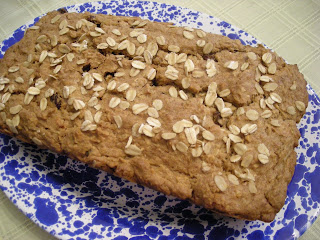 2 tsp powder
1 tsp baking soda
¼ tsp xanthum gum
Mix together the following wet ingredients and then mix with wet ingredients and also soaked oats.
1/8 to ¼ cup honey
1/3 cup oil
1 egg
2 mashed bananas  or   use 1 cup applesauce
Chopped nuts and coconut and raisins may be added if desired.
Pour in loaf pan (bake for 1 hour) or muffin pan (bake for 25 minutes) at 350 degrees.