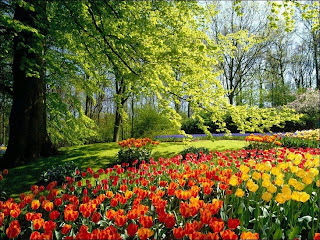 With the spring season having arrived, even though the weather hasn't gotten the message here in this part of Virginia, I think of changes during the seasons of life.  Much of my time in the past year has been devoted to caring for my dear mother who recently entered through the gates of heaven.  Like the changing of the seasons, I am entering a new season of life myself.  Today, I continue to feel blessed that our daughter Sarah remains well without any symptoms of Crohn's Disease.

I recently went down memory lane to recall what life was like eight years ago this month when we were searching to find out why Sarah was anemic.  I pulled out my journal from 2003.  For the previous months, there had been numerous trips to the lab, hoping that the iron levels would come up since she was taking iron supplements.  Much to our continued disappointment, the levels remained abnormal.  Sarah's fatigue was ever present.  The stress of the unknown for her was exhausting to me, and I'm sure all parents of sick children can relate to that.

Trips to the different doctors brought us closer to a diagnosis.  I had hoped it would be something less serious like food allergies or maybe some other less complicated disease than Crohn's.  With Sarah having only minimal GI symptoms, I wanted to choose to ignore that possibility.

Time inched by that spring as we constantly awaited lab results to reveal the clear pictures.  Concern began to increase as we heard words from the doctor that we didn't want to hear, "We need to do an Upper GI x-ray to rule out Crohn's disease."

Spring stretched into summer and in July, a colonscopy indicated that Sarah did indeed have Crohn's disease. I was so upset.  I feared for her future, knowing the side effects of the powerful drugs. However, I felt a driving force within me to seek other answers.

In August, all the pieces of the puzzle began to fall in place for Sarah's return to good health when we met Dr. Poley.  I later realized that we were learning a lesson about God's perfect timing through this. It had taken almost a year of searching for the cause of Sarah's anemia by going to the pedicatrician, a hematologist, and two other GI doctors before we saw Dr. Poley.  It was terribly frustrating during that year that it was taking so long to find answers.  But if we had seen Dr. Poley any sooner than we did he would not have been to the GI conference in Europe, where just prior to our visit with him he had learned about the research done with Culturelle.  If he had evaluated Sarah earlier in the summer, he most likely would not have suggested the treatment that he did.

Many times I get impatient, wanting to know answers immediately.  I began to realize that sometimes even if I don't know the reason for the delays when we are enduring the trials of waiting, it's important to hold onto the hope that things are working for our good, although we may not see it for awhile.

I'm wondering what this new season of life will bring...most likely new lessons to learn.  I hope that you too will find new answers to life's challenges at the perfect time.

Blessings of good health to you,  Martha
No comments: