It’s been exciting in recent years to note that more research is being done to determine the many benefits of probiotics.  We are thankful that Dr. Poley was in tune to research about them in 2003 when Sarah was diagnosed with Crohn’s disease.

With more and more probiotics becoming available, it can become rather confusing in knowing which one is the most beneficial.  Lactobacillus GG has been the most widely researched probiotic and is the one Dr. Poley highly recommends.

In a study done by Gupta et al, at University of Chicago in 2000, significant changes were evident in patients with Crohn’s Disease who took LGG twice a day.  Symptoms of pain, diarrhea and lab work all improved within 1 week! In another preliminary study done in 2002 by Guandalini at University of Chicago, some children diagnosed with Crohn’s disease showed significant improvement by taking Lactobacillus GG.
In 2006 a study was done by Zocco et al at Catholic University on187 patients with ulcerative colitis, and it was noted that LGG seems to be effective for maintaining remission in patients with ulcerative colitis.
In our family, we have noted additional health benefits of increased immunity with LGG (Culturelle).  Along with the benefit of Crohn’s disease remission, Sarah had great improvement with her allergies (seasonal and dust) after taking Culturelle. She rarely gets sick with colds and when she does, the duration is typically brief.

My husband decided to take Culturelle hoping for improvement of his allergies as well.  Previously he had taken allergy shots, used a steroid inhaler every day for about 15 years, and took Allegra as needed.  He began taking Culturelle twice a day in 2007 and stopped taking allergy shots along with the other allergy medicines at that time.  A couple of months later when the fall seasonal allergens arrived, he realized he didn’t even need to take any allergy medicine.   And when the spring allergens arrived, he only needed several allergy pills through that season.  He continues to do well by taking Culturelle everyday and rarely needs allergy medicines.

A friend of ours had repeated episodes of bronchitis in the winter months for a few years.  He started taking Culturelle twice a day and had significant reduction in respiratory infections.

So if you are following Dr. Poley’s plan of diet and Culturelle for Crohn’s or Ulcerative colitis, be encouraged that along with the benefits LGG carries for IBD, you may have other health benefits as well.

With Thanksgiving right around the corner, I have included a recipe for Cranberry relish. Since cranberries are so tart, the recipes for this usually contain a lot of sugar.  But we have found that using some honey and a small amount of orange juice seems to make it sweet enough. Enjoy!
May you and your family have a wonderful Thanksgiving! And may you be blessed with good health!
Martha 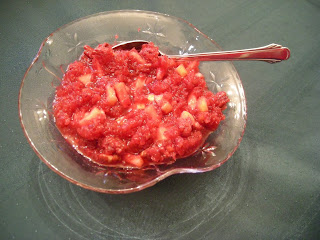 Mix cranberries and orange juice and water in a blender.  Pour into saucepan and add honey.  Bring to a simmer for about 20 to 30 minutes. Stir often.  Allow to cool and then add pecans and chopped apple. Refrigerate.
No comments: